How Did Our Ancestors Vote?

How Did Our Ancestors Vote?

It is almost time for us to vote in the 2019 UK General Election – but what were Elections like for our ancestors?

In England (including Wales) we have had elections since the 13th Century.  These were extended to neighbouring countries following the formation of Great Britain (England, Scotland and Wales) in 1707 and the United Kingdom (England, Scotland, Wales and Ireland) in 1801.

The Government (the party with the most seats) has had firm control of our country since the late 18th Century, although the Monarch did hold some influence over it.  Initially the Government only dealt with taxation, defence and the legal system. Other matters were dealt with locally. Members of Parliament (MP’s) were either members of the Aristocracy or men they gave their patronage/backing to.

Parliament (all elected representatives) was dominated by two main parties – the Tories and the Whigs. In general and very basic terms, the Tories (who became the Conservative Party in 1834) supported small landholders, farmers and minor gentry.  The Whigs favoured the aristocratic families although later they also supported independent merchants.  The Whigs became the Liberal party in 1859 when they merged with a smaller party called the Radicals. The Labour Party was formed by the Trade Unions in the late 19th century.

Neither of the main parties had clear cut policies and on important matters MP’s would vote as instructed by their patron.

Each County (rural areas) or Borough (towns) would send two MP’s (regardless of its size) to the Commons after an election. If, however, the two opposing parties agreed to send one MP each then no election was required.  Seats could be bought by very wealthy landowners, even though they lived at the opposite end of the country. For some it was a status symbol rather than a desire to represent people and improve lives.  For those who were competing against very wealthy opponents, they may have had to pay voters to vote for them.  In 1780 William Wilberforce was elected MP of Kingston upon Hull after spending nearly £9,000 buying the support of 1,500 voters.

The right to vote was initially restricted to owners of property with a rateable value of at least 40 shillings (approx. 18 days wages for a skilled tradesman in 1750*).   Between 1780 and 1832 Land Tax assessments were used to determine who could vote. From 1832 the right to vote was extended to men who owned or rented property. For those in the towns the restriction was for those who rented or lease property worth at least £10 a year. In rural areas they had to own property worth 40 shillings a year, rent property worth £50 a year or have copyhold tenure worth £10 a year.[1]

The right to vote was determined by the property owned or rented in a specific area, therefore some wealthy men could vote more than once if they had qualifying properties in more than one borough or county.  This was possible because elections were held over several weeks, rather than on one day as we do now. A man could vote in one area and then travel to his other property and vote again in that area. It was not until 1911 that elections were held on the same day throughout the country.  They may even have voted differently in each area as voters may have been forced, persuaded or bribed to vote for a particular candidate by people of influence in that area such as their landlord or banker. As voting was not secret until 1877, voting against their wishes could have had drastic consequences to the livelihood or fortune of the voter concerned.

In a ‘Pocket Borough’ control was held, or “in the pocket of”, one person or family. Therefore the voters had to vote for whoever that person or family supported. ‘Rotten Boroughs’ were areas that had once been large but later had few (if any) houses, and therefore very few voters, but would still elect MP’s.  Old Sarum in Wiltshire was an example when it contained less than three houses but sent two members”.[2]

If your ancestors was entitled to vote where should you look? 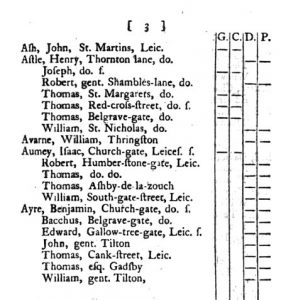 Poll books were published between 1696 and 1872 after each election naming the voters and who they voted for. The candidates were represented by the initial of their surname in column of each page.  They were published for each area and some listed the occupation of each voter as well as where they lived.

Poll Books can be found in local archives, on some genealogy subscription based websites as well as free sites such as Google Books. The electoralregisters.org.uk site has links to several free Poll books. The Institute of Historical Research Library holds a large collection of printed British parliamentary poll books, both originals and photocopies.

From 1832 Electoral Registers were published listing those who were eligible to vote. These can also be found in local archives and online.

Suffrage did not just refer to the well-known fight for women to be given the vote.  Instead it refers to the right of anyone to have the vote.  Manchester’s Peterloo Massacre in 1819 called for Parliamentary reform, universal suffrage and equal representation.

The major changes to voting rights in the UK include:

1832 – Voting was extended to men meeting property qualification. The number of rotten boroughs was reduced and Parliamentary seats were redistributed to represent urban areas.

1867 – The right to vote was given to urban working men meeting the property qualification.