About 16 years ago I started to research my husband’s family history in Norfolk, England. During this research I came across Danford SHARMAN the son of James and Martha and the brother of my husband’s direct ancestor John Valentine SHARMAN. Danford was the 5th of 7 children to James and Martha and according to the census returns he was born about 1831 in Quebec, America, however all of his other siblings were born in Surlingham, Norfolk.

Danford (who was also known as John Danford on various records and once transcribed as Durnford) married Sarah JEX in Yarmouth in 1852 and they had five children of which the eldest two died young. The surviving three children were: Eleanor Florence Eunice bn 1857, William Danford Alonzo bn 1859 and James Henry bn 1861.

With such an unusual name and a birth in Quebec I searched the Internet for John Danford and found a sailing ship called The John Danford that sailed from Yarmouth to Quebec twice in 1831 and named the emigration agent as being J. A. SHARMAN which seemed a coincidence. So the theory at that time was that perhaps he was named after the ship on which his parents and siblings had sailed either going to or returning from Quebec, and perhaps a family member helped with their passage.

I traced Danford in Norfolk up until the 1871 census after which I could find no further trace of Danford and his family again, and this mystery continued until September 2012. 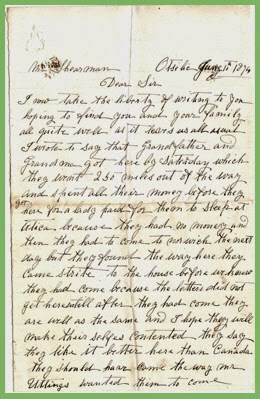 During 2010 I made contact with a distant cousin (Gillian) who lives in Canada and is directly related from John Adams SHARMAN, the shipping agent mentioned on the notice for the John Danford ship, and who was the brother of James, Danford’s father. This contact eventually lead to me and my husband visiting her in Canada in 2012 and it was during this visit she showed me two letters from a Nellie DURNFORD, in Otselic, Chenango, New York.

One was undated and to her grandmother regarding the journey her grandparents would be making to stay with Nellie and her parents. The second letter was to Mr J A SHARMAN dated June 1874 and acknowledging the safe arrival of her grandparents who had apparently visited him in Quebec first.

Gillian had no idea who Nellie was or why these letters where in her grandfather’s possessions. The name DURNFORD did make me wonder if this was the family Danford’s parents had visited in Quebec, and perhaps named after (rather than named after a ship). So I did some research into Nellie and with the help of contributors on the Rootschat forum (especially Kristen) was given details of the 1875 New York census for Otselic. This showed an Ellen F DANFORD (Nellie) aged 16 and born in England, was living in Otselic with her parents John DANFORD aged 41 who was born in Canada, his wife Sarah (41 years) and other children William aged 14 years and Henry 12 years and her grandfather James DANFORD aged 81 years also born in England who was listed as a widower. The 1875 mortality census showed that a Martha DANFORD aged 79 years had died on 14th Feb 1875 in Otselic of old age.

It was at this point that I realised that James and Martha DANFORD in Otselic were probably James and Martha SHARMAN for Surlingham and their son Danford had moved to Otselic between 1871 and 1873, and for some reason changed the family name to DANFORD and was known as John. All the names and ages matched (except the children were all two years younger than their actual ages).

Earlier this year I found that James and Martha SHERMAN arrived in Quebec aboard The Delta on the 29th May 1873, so everything seems to be falling into place. James returned home to Surlingham and appeared on the 1881 census as a widower. There is no trace of a death or burial of Martha in Surlingham which also seems to point to her death in Otselic as being correct. Sadly his brother John A SHARMAN died in April 1875, a little over two months after his wife’s death.

I found no further details regarding John Danford or his wife Sarah, however the children were easy to trace in subsequent US census returns. William married and stayed in the Chenango area but appears not to have any children. Nellie did not marry and lived in Madison, New York from about 1905 until after the 1930 census. Henry James married and had five children one of whom he named Jex (his mother maiden name). He moved to Boston, Massachusetts, where he died in 1905.

So thanks to Gillian, Kristen and two letters written by Nellie in 1875, the mystery of what happened to Danford SHARMAN and his family is finally resolved, and proves that the most insignificant looking letter can solve a 15 year old mystery. Now I just have to find out when and why Danford’s parents visited Quebec at the time of his birth in the 1830’s!

This story was published in the Who Do You Think You Are? magazine in September 2013.