Unlike Scotland, the birth, marriage and death certificates for England and Wales have never been available online. After many years of campaigning the General Records Office (GRO) was given permission from the Government to produce PDF non-certified copies of these certificates in 2015. You can read more about Civil Registration in England and Wales  here.

The purchase of PDF marriage records or birth and death records after 1915 and 1957 respectively, were not included in the trial.

These copies can only be used for research, not for official identification purposes, as they are not certified. Phase 2 piloted the delivery of the PDF records within 3 hours, and phase 3 the delivery of PDF copies of civil registration entries that are not held by GRO in a digital format.

Phase one was clearly a success as in October 2017 a new pilot was started to run for a minimum of 3 months.  Within that time over 79,600 PDF applications had been processed. The pilot was then extended for a minimum of a further 6 months until at least the 12th July 2018. In addition the end date for birth records has been extend by a year to 1916

To assist in the ordering process a free online searchable database was also introduced. To access this you must register and login into the GRO website. Unlike the original GRO indexes, which many UK based family history researchers are familiar with, these indexes include the mother’s maiden name for most birth registrations prior to 1911, and ages of death prior to 1860.  Both of these will be a huge boost for researchers.   Sadly, at the time of writing, the birth index only goes up to 1917, although the death index continues to 1957.  This means that in order to purchase a PDF copy of a post 1917 birth record, the reference details must be found on the FreeBMD website or other partner databases.  There is currently no searchable GRO index for marriages.

To search either index is easy but also surprisingly restrictive, as can be seen from the image below, and can be accessed via: https://www.gro.gov.uk/gro/content/certificates/indexes_search.asp. 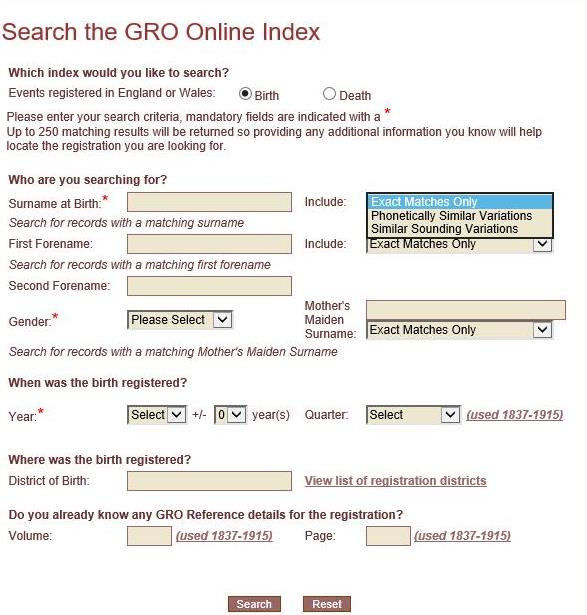 The search for names can be exact spellings, phonetically or similar sounding. The names are also broken down into three parts, surname (which is a requirement), followed by first and second forenames.  Although this can be a useful feature there are issues if the person was not known by their 1st forename. It is possible however to search without inputting any forenames, but a surname must always be included.

As the mother’s maiden name can also be added this can making the search for popular surnames easier.

The main issues with this search is that you must choose the gender (male or female but both), and a year, but you can only search for up to 2 years on either side.

An interesting omission is that you cannot search the indexes by county.  Currently you can either search by registration district, which can be restrictive if the family moved around, or by the whole of England and Wales.

The search page for death registration is similar but includes the age at death (+/- up to 10 years) instead of the mother’s maiden name.

To try this new system, I decided to look for the births and deaths of some of the people in my family tree, and in each case I found all of them, despite some reports of missing entries. In fact, because of the mother’s maiden name search, I found a couple of births that I had not previously found as they had been born and died between census years.

In most cases when I searched for an exact spelling of a surname with no forenames given the results were displayed very quickly although you have to scroll below the search box to see them. When I request a phonetic or similar sounding search, it could take up to a minute for the results to be listed, and several seconds to change to the next page.  Whether this was because of a long search or because the site was busy I do not know.

My main concern with the results in general, was that the quarters were listed by initial letter. M = March, J=June, S=September and D=December. For experienced researchers this is not too much of a problem, but for new researchers it can be confusing, especially as J could be taken to mean January. There has been some online discussion on various forums about the naming of quarters with some preferring 1st Qtr and 2nd Qtr etc., but my students usually find the JFM, AMJ formats easier to remember.

Another issue with the results is the lack of county.  I appreciate that counties moved their boundaries, but I needed to do an internet search to find that the ‘Lexden and Winstree Union’ were in Essex.

Early reports of the use of this database suggested that the deaths of infants contained errors relating to their ages.  Using known infant deaths from my own family tree I looked up several and only one gave the age as 0 years.  In other cases 15 years was shown instead of 15 months, and 1 year instead of 1 day.

The GRO have included a system to correct any incorrect or missing entries, as shown below. 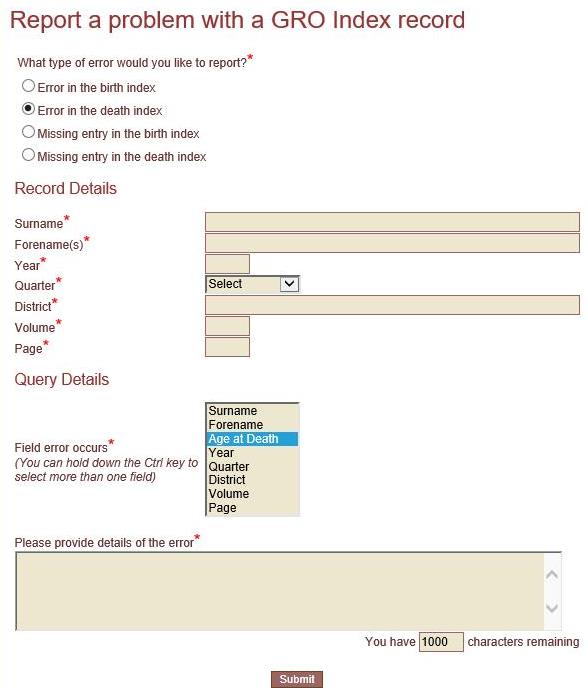 The form opens in a new browser window and you are required to complete all of the details yourself.  There is no link between the record and the report.

The entries are linked to the corresponding index page,  so it would be wise to use the FreeBMD website to check for possible transcription errors.

It seems clear that the GRO searchable index is simply to help researchers to purchase the correct record, rather than a general research tool. The addition of the mother’s maiden name is very useful, but tempered by the restrictive search within specific registration districts, only using +/- 2 years and the male/female requirement, meaning that several searches for family members must be made rather than one inclusive search. The popular FreeBMD website will in my view continue to be a vital resource for the majority of general searches, especially as their double entry system can help to weed out transcription errors.