Do not worry; this is not a blog about the Macabre or even Halloween, which is just around the corner. It is in fact what all family history researchers do – search for dead people, namely our ancestors graves.

Whilst many researchers stick to online records and those held in archives, there is one place which some tend to forget about – the graveyard! Although death and burial records can be helpful, in many cases they do not always give you a wider view of the family, and they can be impersonal. A trip to the church burial ground or local cemetery can bring you closer to your ancestors, not only in a physical sense, but also an emotional one.

Not everyone could afford a gravestone (also known as Memorial Inscriptions or MI’s), in some cases you know where they were buried but cannot find the grave marker. The church or cemetery office can be very helpful here, as they generally have maps of where everyone was buried. 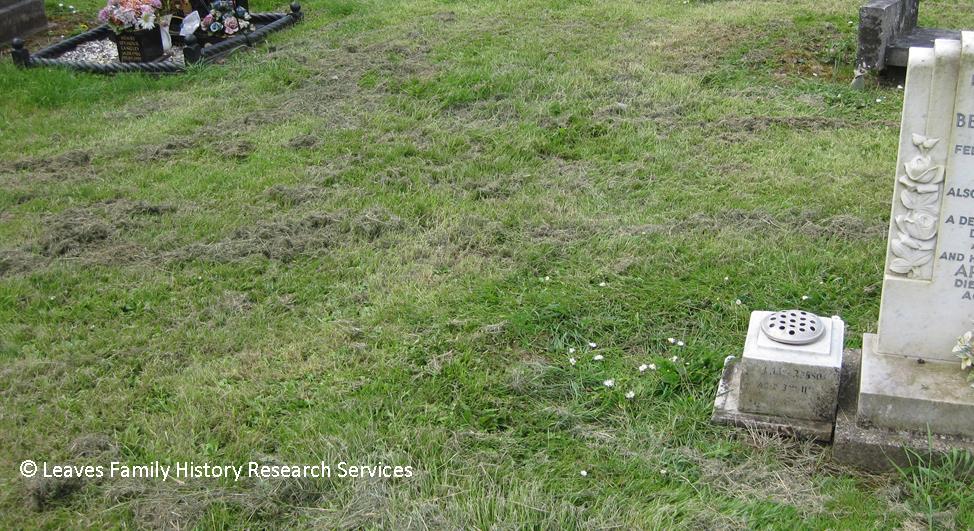 In this case the space next to the white gravestone is a grave which belongs to a husband and wife who could not afford to purchase a headstone.

Do not assume however that no stone meant they could not afford one. It could also mean that the original headstone was damaged and removed. One of my local cemeteries suffered bomb damage during WW2, and a number of graves where destroyed. All that remains is a slight dip in the ground that once had a lot of headstones.

The type of headstone your ancestor has, if it has survived, can indicate how wealthy the family were.Did they have a large imposing stone, monolith or even a tomb, or did they have a small simple stone? Was the headstone made from expensive hardwearing granite or cheaper sandstone that can quickly decay over time?

Whatever the type and style it is important that you take a photograph of the grave showing its general location and a closer viewer of the full inscription, as well as writing down the full inscription, not just the basics. In some cases this will mean getting on your hands and knees to move away the undergrowth, vines and algae.

NEVER scrub or use chemical to clean gravestones without the permission of the graveyard/cemetery owners. You could inadvertently cause more damage.

Look at the Neighbours.

Once you have found the grave of your ancestor, do not think that is all there is to do. Have a wonder around and look closely at the neighbouring stones it may be that family members are close by. Just because the names are not the same do not mean that they are unrelated, although they could be. If graves are very close to each other, then the chances are they are related. This first image shows two headstones of a husband and wife next to the grave of their daughter and son in law. The second image shows a lady buried with her sister and brother in law. 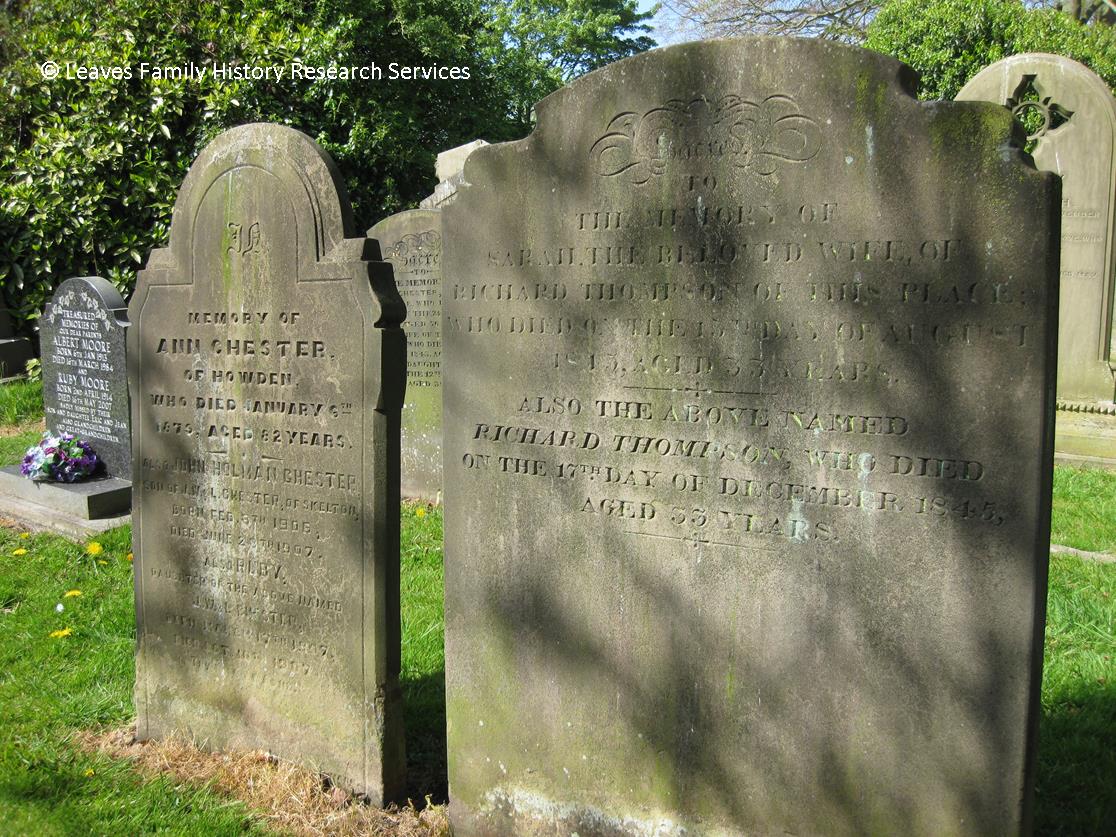 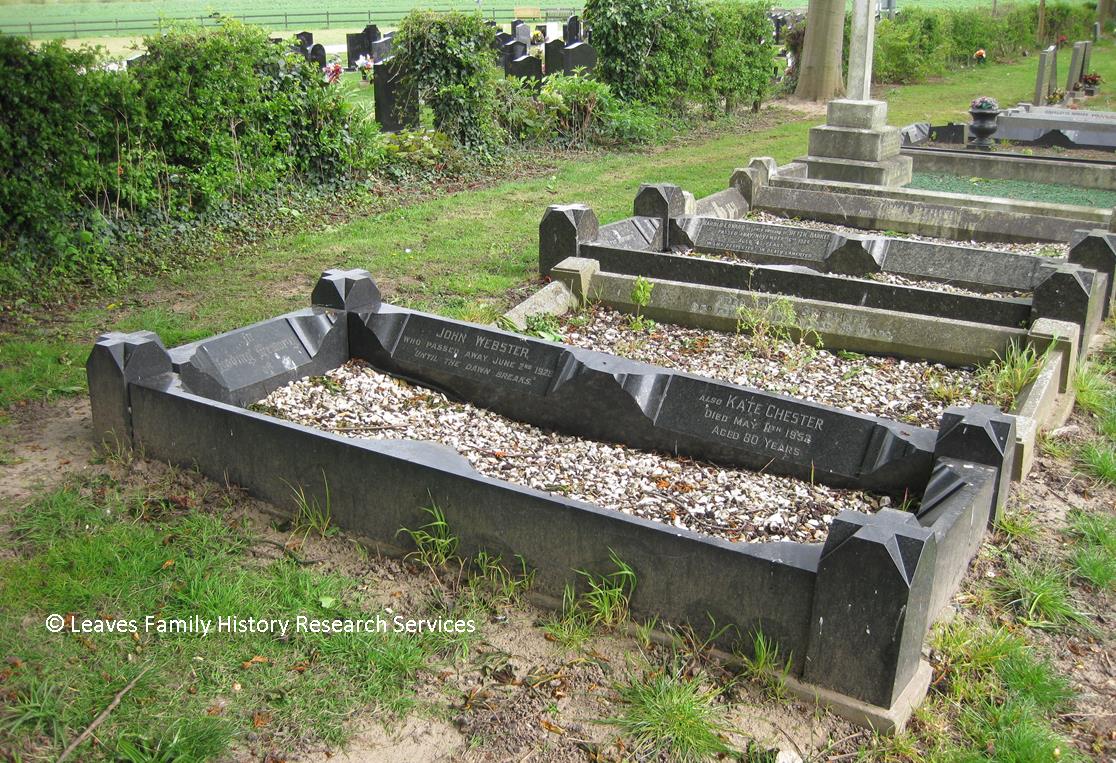 The location of graves can also give you some information about your ancestors. Often important people were buried close to the church building or the path leading to the church door.

In cemeteries different sections may belong to different groups. One part of the cemetery will be council owned and may include Methodist burials, but other areas could be for Church of England burials when the local churchyard is full and Catholic burials. Always check with the Cemetery staff about the different areas.

What your ancestors chose to have inscribed on gravestone can also tell you much about the family. In some cases it may even reveal their cause of death, if they have been ill for a long time, and may include other family members, including infants who may have died shortly after their birth. Even the image used may have some significance to the deceased, and give you a clue as to their belief or affiliations.

If you cannot read the inscription, check with the local Family History Society to see if they recorded it in the past. Many FHS’s record the Memorial Inscriptions in their area and publish them in booklets. The local library or archive office may have a copy you can look at. Just because the inscription cannot be read today does not mean that it could not have been a few years ago.

Always check details on inscriptions with other records – they have been known to be incorrect!

Don’t forget, to go hunting in graveyards you need a notebook, pen/pencil, a camera – and sturdy shoes! These places do not respect high heeled shoes or flipflops.

If your ancestors died in East Yorkshire or Lincolnshire – ask me to look for their graves for you.