Researching your Ancestors in English Newspapers

Home/blog, research/Researching your Ancestors in English Newspapers
Previous Next

Researching your Ancestors in English Newspapers 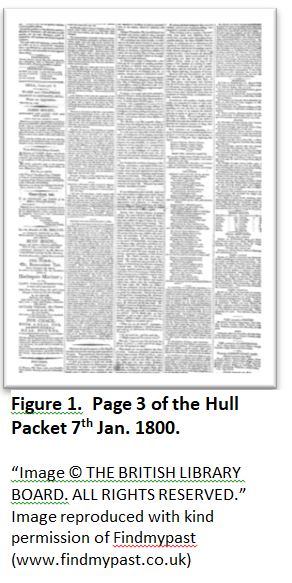 Newspapers can be a great source of information about your ancestors, ranging from the birth, marriage and death notices, details of court cases, advertisements for their business, advertising for domestic staff, auctioning farm land or house contents, group or society memberships and reports of good deeds or crimes including victims, witnesses and police officers as well as the culprits.

Articles cover all walks of life so do not think that your ancestors would not be worthy enough to appear in them.

Be aware, however, that historical newspapers are not as easy to read as current ones.  They contained many small articles one after another, often without a heading, and rarely contained images, as demonstrated here.

Britain’s first newspaper has been traced back to 1621 when the ‘Corante’ was published in London, but publication was not on a regular basis. The first English daily newspaper was not published until 1702.

Due to a largely illiterate population, newspapers took a while to become popular, as most people relied on Town Criers to hear the news.

Many of the 30,000 newspapers, some often a single sheet, printed between 1640 and 1660 can be seen at the British Museum. Other newspapers dating from 1699 can be viewed at the British Library in their Newspapers Collections.

Many County Archives have copies of local newspapers on microfilm but it is always wise to check first to make sure they have the copies for the period you are searching for. Few have been indexed and some newspapers could have several editions each day with slight differences in what was reported. Researchers generally need to trawl through each paper manually to find the article/person they are looking for.

The British Library Newspapers Collections holds the largest collection of British newspapers including:

For those researching ancestry in Wales, the National Library of Wales in Aberystwyth holds original copies of Welsh newspapers which can be viewed in their reading rooms.

There are a few websites that give newspaper access most of which you have to pay for.  The most popular are those on Find My Past  and the British Newspaper Library Archive   (not to be confused with the British Library Newspapers Collections discussed above).  Although the same company currently own both websites, the terms and conditions, and pricing structure are very different.  Please be aware that these online copies are under license and so permission from the relevant website is required if you wish to publish any articles found there.

Both websites have a free to use index for any search requests, which will give you an idea of whether the article is relevant to you.

Some British library services, colleges and universities have free online access to the British Newspaper Library. This online access may be listed under Gale Cengage Learning. It does not have the same newspaper collections as Find My Past or the British Newspaper Archive websites.  It is possible that you may find an article using one website but not in the other. The Gale database mainly covers newspapers dated before 1900.

The Welsh Newspapers Online website is a free online resource from the National Library of Wales where you can search and access nearly 120 newspaper publications from 1804 up to 1910.  https://www.llgc.org.uk/index.php?id=4723

When conducting a search using the British Newspaper Archive, a newspaper image will appear on the left of the index result  showing a slightly blue area. This is where the article is located on the page. In many cases the whole column or page is highlighted so you will need to read through it all carefully.

The index shows the date and county of publication, the newspaper title and which page the article can be found on.

It is usually a good idea to search both websites, as each may give slightly different information. This can help you to locate the article and determine if it is what you are looking for.  Remember you will need to pay to view the full article.

The best search results are not always found by using the forename and surname search boxes.  The OCR system is unable to differentiate between names and words.  For instance looking for John Smith will also find words such as blacksmith, or silversmith.  A search for the name Wright will also list shipwrights and wheelwrights, and the surname Chester will also include place names such as Chester and Manchester.

It will also search for the keywords in the order you have entered them, so it may be worth changing the order to find different results.  As shown below a search on Find My Past for ‘Hull’ and ‘wheelwright’ gives 639 results. A search for  ‘wheelwright’ and ‘Hull’ gives 500 results.

Be aware that some of the spelling in the article may appear incorrectly.  This is because the system uses Optical Character Recognition (OCR) whereby the computer tries to read printed text.  It is not always accurate, hence the mistakes.  In the article above ‘Eric’ is shown as ‘Erio’ and ‘Hesslewood’ is also spelt as ‘Heselewood’.  A search for ‘Eric Hesslewood’ would not find this article.

The world’s oldest surviving periodical is The Oxford Gazette which was founded in 1665. It was renamed as the London Gazette in February 1666.

The London Gazette was originally the official newspaper of the Crown and British Government, with details about all Acts of Parliament and wars, including the Glorious Revolution of 1688, the Napoleonic Wars and the Crimean War, as well as other major events such as the Great Fire of London in 1666.  During the two World Wars it recorded all the official War Office and Ministry of Defence events. This included listing those ‘Mentioned in Despatches’ (MIDs), honours and awards for gallantry or meritorious service, officer commissions, appointments, promotions, and casualties. Researchers can often use these notices to track a military career.

Apart from military and government notices the London Gazette also covers Wills, bankruptcies and insolvency notices.  The Gazette is an official record and as such all the information published is verified and certified as fact.

This website has recently been redesigned and some say it is not as easy to use as it previously was; however it is still a useful and free source of information. Links to advice on searching its database can be found here: https://www.thegazette.co.uk/help.

The Edinburgh Gazette and the Belfast Gazette (previously the Dublin Gazette) can also be searched on London Gazette’s website. Since 1889, all three Gazettes were published by Her Majesty’s Stationery Office.

Newspapers are a good way of learning more about your ancestors and their families – if they appeared in them. You may also be surprised how far afield the antics of your ancestors were published.  The same article often appears in different newspapers across the country.

If you need advice or help in searching for your ancestors in the newspapers, contact me via my website or on Social Media.